Herbert Sunderland was the oldest son of four children born to William and Jennie McMichael Sunderland on August 1, 1918. Siblings Harold, Helen and Mildred completed the family.

The Sunderlands, a hard working farm family from Vermillion, Kansas, had migrated from central Pennsylvania to northeast Kansas in the late 1800s.

Mother Sunderland described her oldest as a child so full of boyish glee. Father taught him the Sunderland work ethic which would serve him well in his further endeavors.

Herbert attended school in Vermillion where he enjoyed many sports like football and tennis.

Herbert met his future wife, Lois Evans, daughter of Foster and Zula Reed Evans in school. Mr. Sunderland took second in high school tennis tournament and Lois took first in the tournament while working on her teaching certificate at Ottawa University. By coincidence the Evans family had also migrated from central Pennsylvania to northeast Kansas in the late 1800s.

Herb graduated from Vermillion High School in the spring of 1938.

On July 16, 1941, The 22 year old enlisted for the Air Corps at Jefferson Barracks, Missouri. He listed his occupation as farm hand.

The next several months were spent in training in places like Barksdale Field, Shreveport, Louisiana in preparation to go overseas.

On Jan. 31, 1942, traveling on troop ship USS Scott, Herb and his bomb group arrived in Brisbane, Australia on Feb. 25, 1942. His first assignment was as a mechanic with the 5th Air Force Bomb Group 19 Squadron in Australia where he soon took duty as an engineer/gunner in a B-26 Martin Marauder. His pilot was Lt. Barry Burnside.

Working conditions were less than ideal with the scorching heat, long hours, mosquitoes and lack of equipment. Spare parts had to be scrounged from wrecked planes. Their clothes were often what ever they could come by and with lack of sleep, grounds crews were often seen drifting off sitting on the ground beside their planes.

Between duty stations, Herb got a long furlough back in the states, He was picked up at the bus station in Topeka, by Foster Evans (future father-in-law). Once they returned to Vermillion, Mr. Evans also picked up Lois. The first thing Herb asked if she was married yet, to which she replied, "Not unless you asked me." After she said yes, she accompanied Sgt Sunderland to his next duty station in Shreveport, Louisiana at Barksdale airbase. The two young people, so in love and so full of expectations, were married on Nov, 20, 1943.

Barksdale Field was named on 2 February 1933 in honor of WWI British pilot, 2nd Lieutenant Eugene Hoy Barksdale (1895–1926). While testing a Douglas O-2 observation airplane for spin characteristics, Barksdale was killed on 11 August 1926, over McCook Field near Dayton, Ohio. He could not recover from a flat spin and was forced to parachute from the plane. His chute caught in the wing's brace wires. Lt Barksdale tragically fell from his bi-plane to his death.

Barksdale was developed as an Air Corps flying school in November of 1940. The runway apron was completed mid-1941. At the new airstrip, Herb teamed up with pilot Lt. Claude Brown where they were trained on the new A-26 invaders with the ultimate goal of training other crews on the plane while overseas. 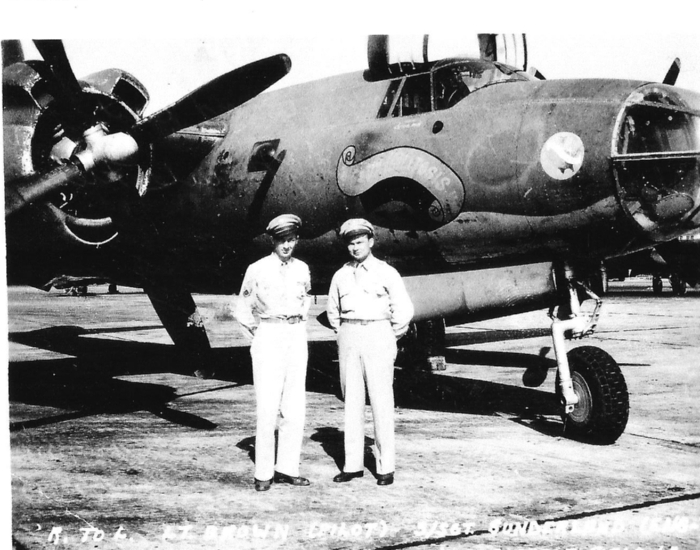 Brownie, as he was called, and Herb flew one of the A-26s from Bangor, Maine to eventually team up with the 416th Bomb Group in Europe. "Our second leg of the trip was an uneventful flight to Goose Bay, Labrador. The third leg however, was something else, indeed. We got an excellent briefing for our route which included a film of the approach to landing at Greenland airstrip. We were scheduled to land at a field known as Bluiewest 3. The film depicted the proper approach procedure to a runway that was hidden between two mountains. The runway sloped some three hundred feet from the ocean to the top end. That end of the runway rested at the foot of a glacier. The special approach was necessary because the mountain tops were generally shrouded in clouds. If you waited until you saw the runway, you would overshoot and find yourself flying up an ever-narrowing fjord into the mountains.

Sgt. Sunderland held his breath while Brownie set the plane down, the landing had gone well. After exiting the plane they noticed that a cowl flap that kept the engine from overheating, was stuck. The base engineer examined the ship and grounded the plane. The rest of the squadron was long gone when we were ready to fly the next leg. We were preparing to make the crossing alone when a Canadian pilot of a Mosquito fighter-bomber wanted to tag along on my wing. The Mosquito was so fast that he was unable to stay right on my wing. He would fly great circles around us in an effort to keep us in sight. We reached Iceland without any problems and said goodbye to the British flier never to see him again.

Our next leg was on to Scotland. We found the rest of our squadron there. Together we flew with our squadron on to Great Britain and finally arrived in Great Dunmow, England."-Lt. Brown

On Sept 30, 1944, they left Dunmow and arrived in France at a base designed A-55 home of the 416th Bomb Group, 671st squadron. At A-55 Navigator/bombardier Jim Kerns joined Brown's crew. Training complete, Sunderland, Brown and Kerns along with another crew involved with training, pilot Jack Buskirk, B/N Robert Hanna and gunner Charles Houston Corbitt Jr. were permanently assigned to the 671st in October of 1944. Together since Shreveport, both crews had become close friends. Herb and Corbitt shared a tent and would keep in touch after the war. A close friend from Barksdale, Mike Williams, also accompanied the group to the 416th, but soon transferred to the 409th Bomb Group.


Sgt. Sunderland and crew flew their first four missions in planes nicknamed, "Baby Alan', and "Oklahoma Outlaw/Josie", then Lt. Brown was assigned a flight lead and later a box leader flying glass nosed A-20K's and A-26's in bomb missions to the end of the war.

"The weather in Europe was lousy so most of the the missions were to spread out and climb through the weather. A B-26 especially equipped with a system of early "Loran" was the lead plane, referred to as a pathfinder. Pathfinder would fly down a radio beam until it intersected with another beam projected across the one we were tracking. This intersection was established as the drop point for that particular target. It was especially good but frustrating as you didn't find out for two or three days later what the results were, derived from photos."-Pilot Lt Claude Brown

"The climb through the clouds would usually be to 12-15 thousand altitude. We had no oxygen or heater and a few hours of that left one very humble. I had frost bite of the toes on one occasion. We had no heat because Stewart-Warner gasoline heaters were installed in the planes. They were too dangerous to use in combat."- Lt.Brown

"The usual load in the A-26s was 4 each 1000lb bombs. The largest the A-20s could carry was 500lb. The bombardier in the A-20 would have to set the trajectory for the 1000 bombs as the load for the other 5 planes would hit the targets while the 500lb bombs went astray. There weren't very many of these when were assigned a "C" model which was the Dinah Might/ Rickey Tick II".- Lt.Claude Brown.

"Our plane frequently came back to base looking like a sieve. On one mission, we had an AA shell explode inside the bomb bay just after bombs were away. A piece of flak came up through their open bomb bay doors and blew a hole through the plane's top the size of a baseball where Sunderland and I sat."-Lt. Brown

In between missions Sunderland and Brown flew in many different planes whether they were test flights after maintenance, weather checks, reconnaissance or transferring planes to and fro.

One of the things that Sgt Sunderland's wife Lois said bothered her husband most about the war was the return trip on the final flight home. He, along with his friend Robert Hanna, were reassigned to the 391st Bomb Group for the trip. They were ferrying planes back to the states. Lt. Hanna was in the lead ship. Herb and his pilot, John Barta were in one of the trailing planes when they were forced to watch as the lead plane lose control and nose dive into the Mediterranean Sea.

Herbert returned home from war a national hero. He never talked much about the war, but kept in touch with close friends from his war years. He quietly returned to farming in Vermillion. In 1956 he moved the family to Moab, Utah and took a job at Atlas Minerals Corporation as an instrument mechanic, processing uranium and vanadium ore.

Herb was able to take pleasure in his wonderful world he had fought so fearlessly to preserve. He enjoyed bowling and tennis with his wife as well as camping, fishing and just being outdoors in the quiet serenity around him.

With his loving family with him, he passed on June, 6, 2000 at age 81 into the Heavens to reunite with war buddies who had not made it home after the fighting stopped and the planes were at rest. Wife Lois, sister Helen Johnson, brother Harold Sunderland, sons Gary and Donald and grandsons Dennis K. and Kelly Keith, survived to mourn their loss and remember his remarkable accomplishments.

He is laid to rest in Vermillion Cemetery in Marshall County, Kansas.

An interesting side note: Herb's first assignment was with the 22nd Bomb Group which later became the 22nd Air Refueling Wing. At different times both his grandsons, Dennis K. and Kelly Keith, served with the 22nd Refueling Wing while they were in the Air Force. 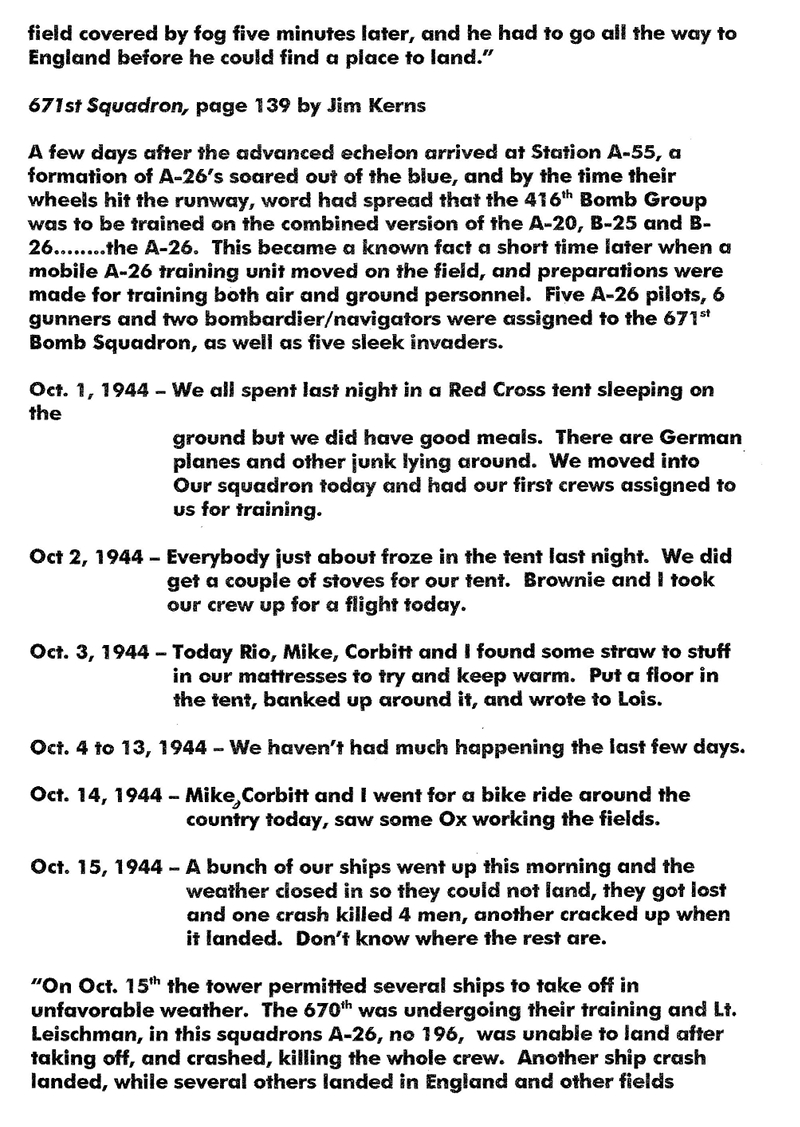 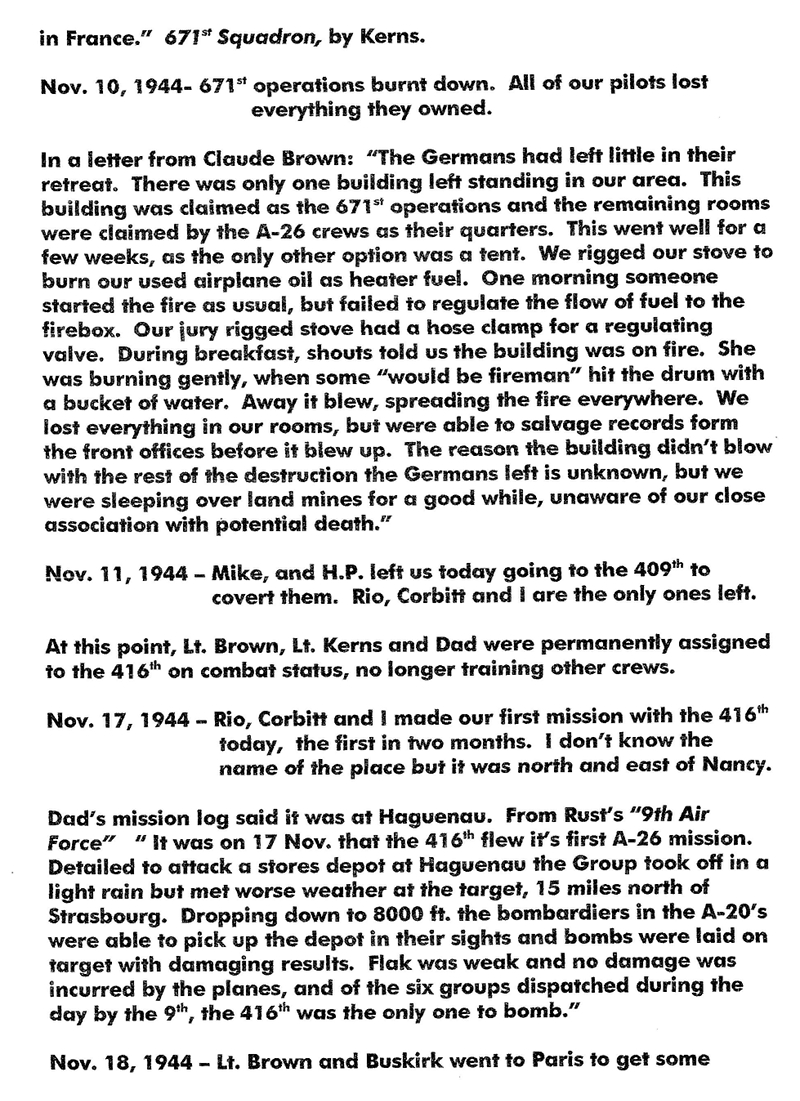 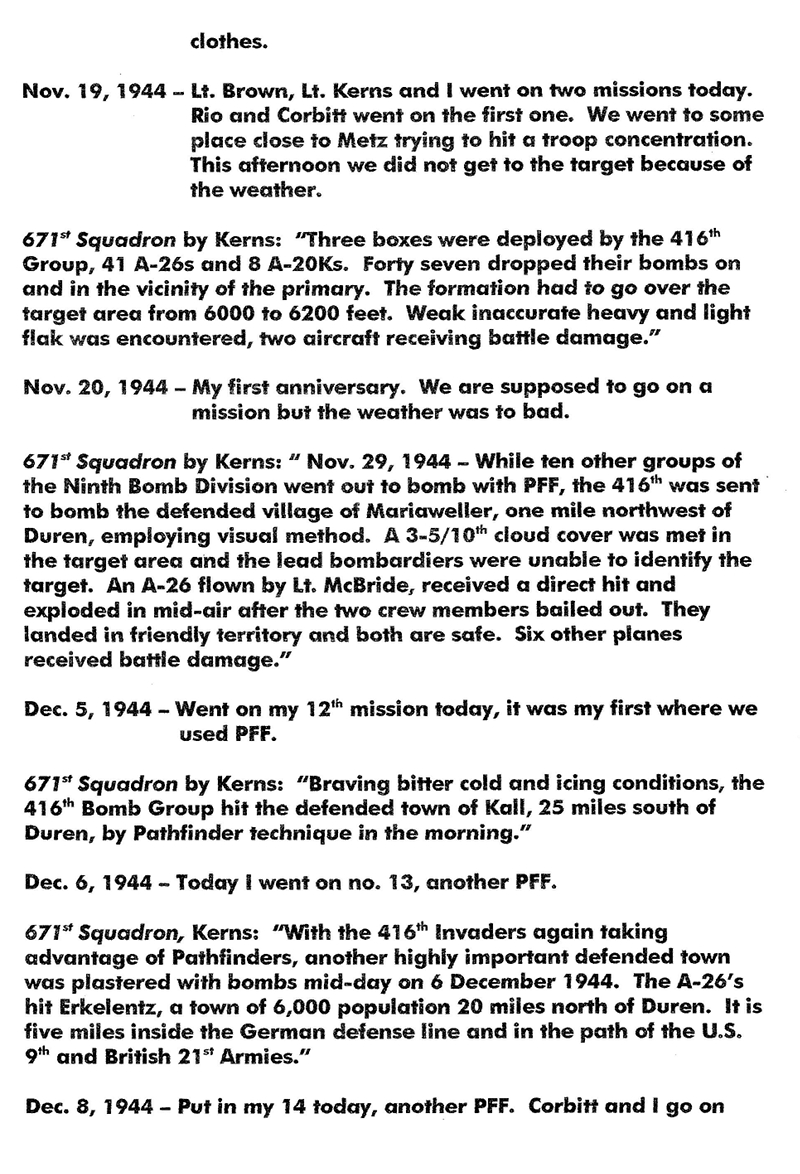 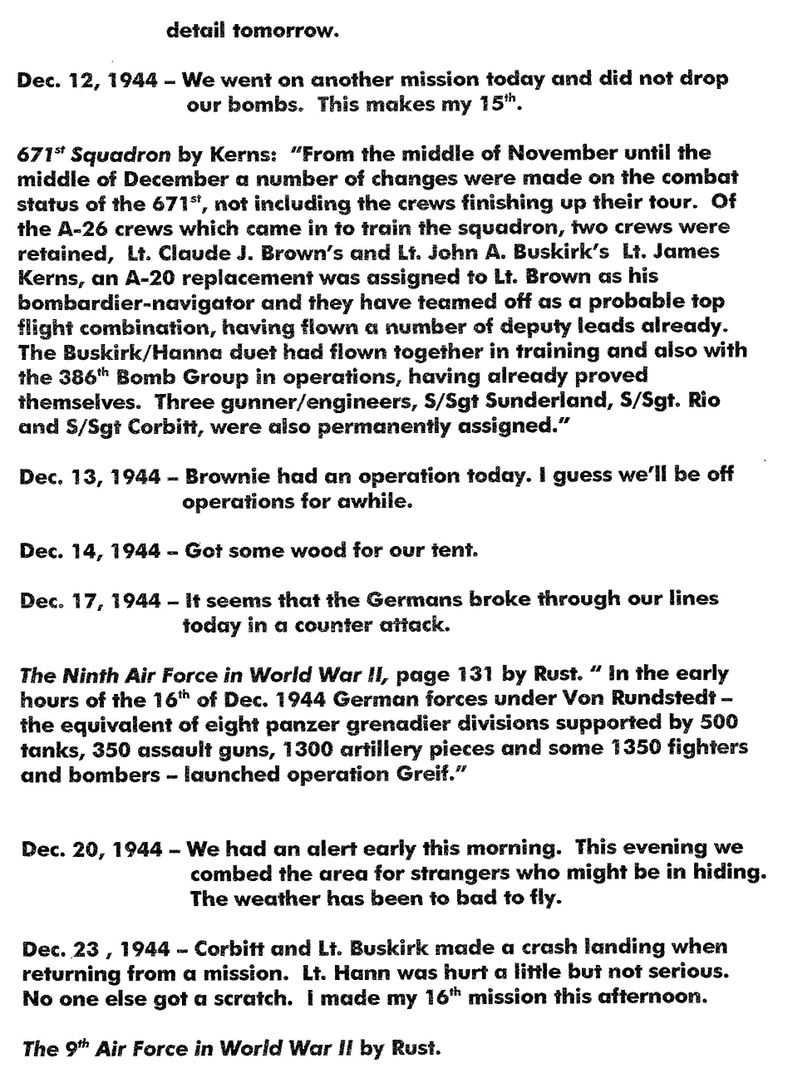 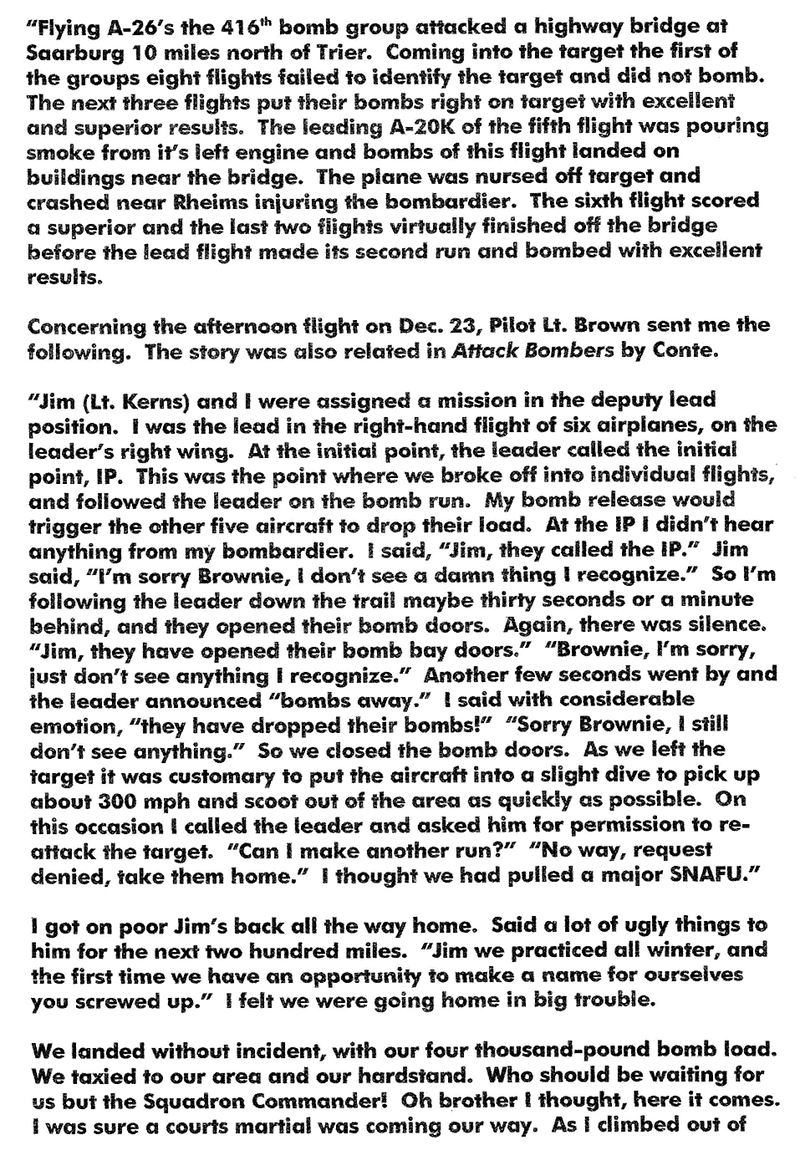 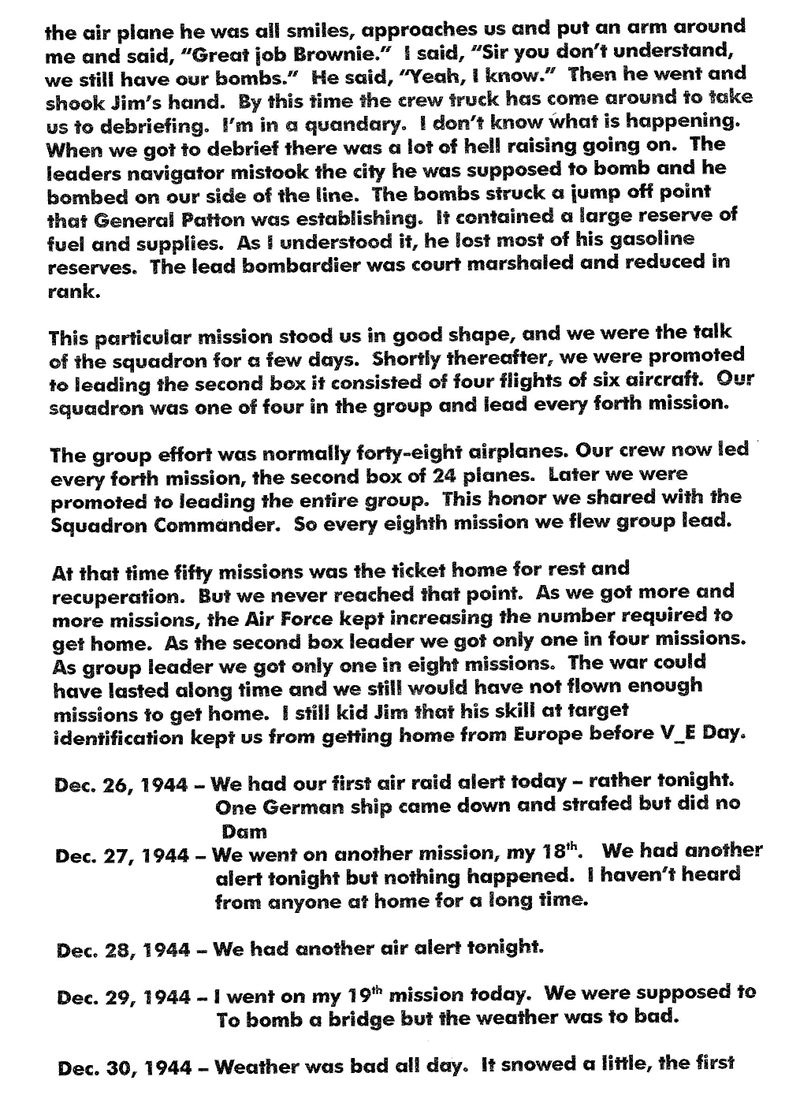 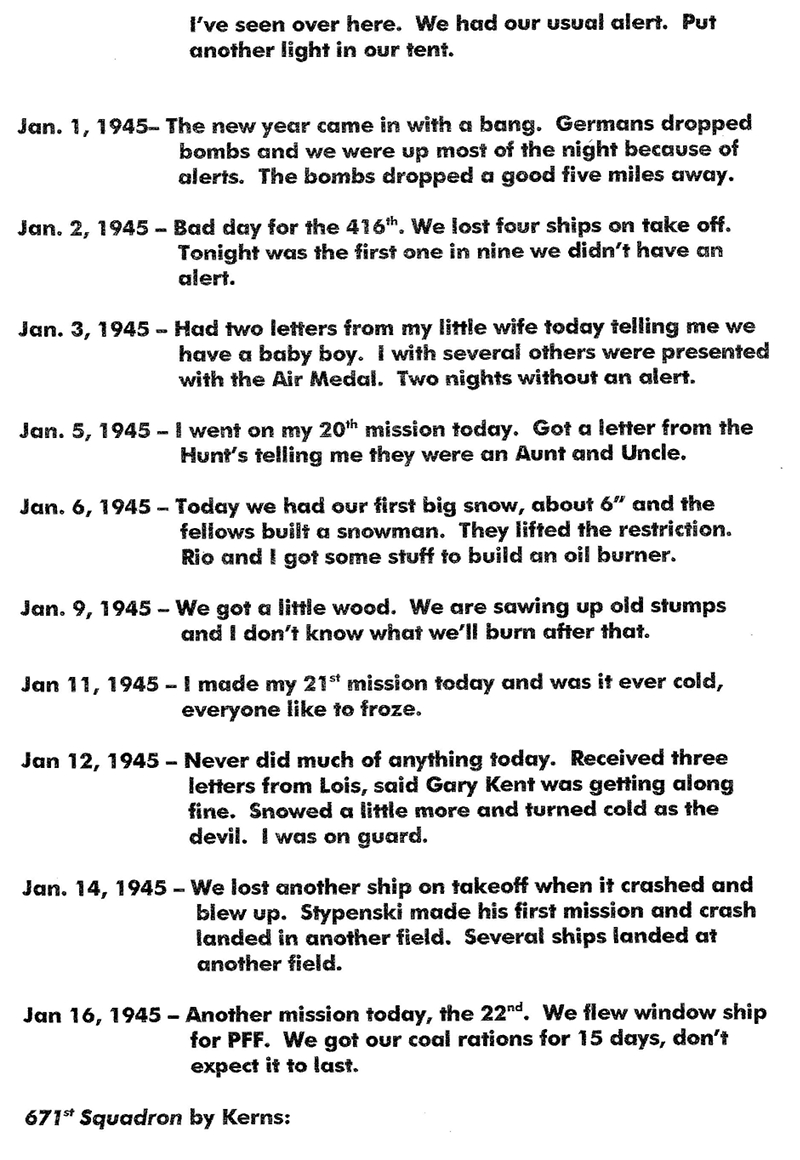 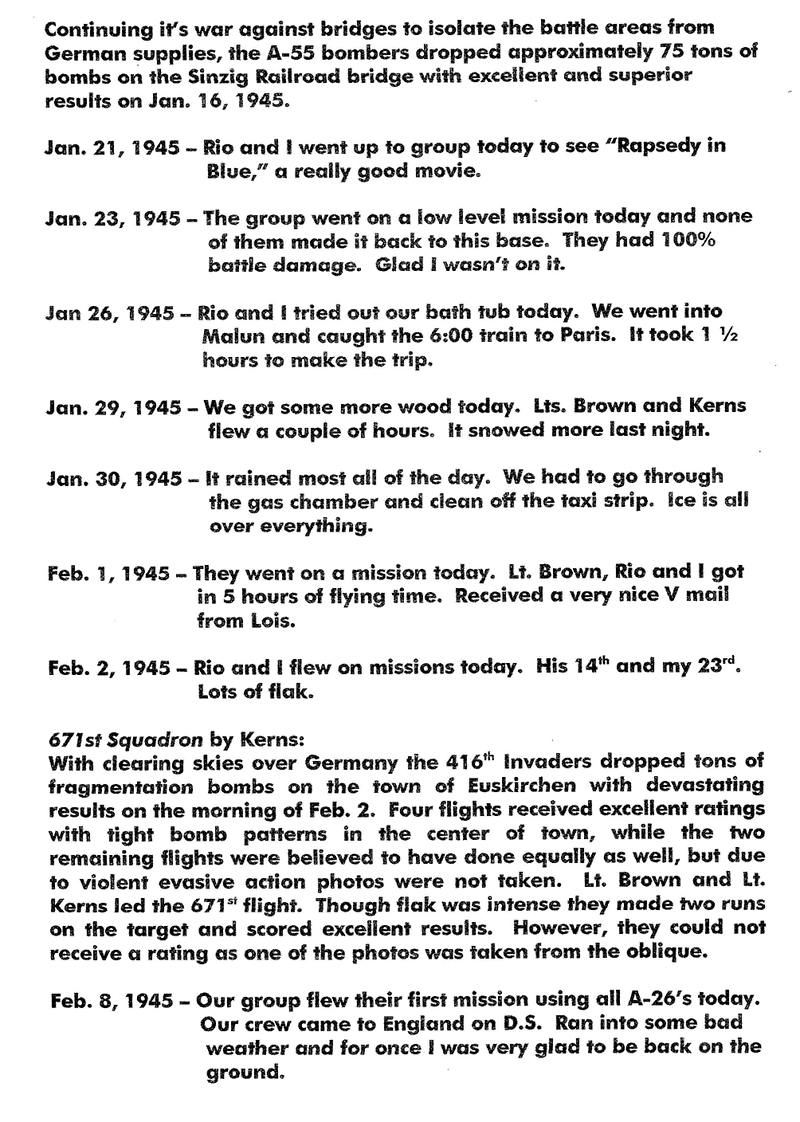 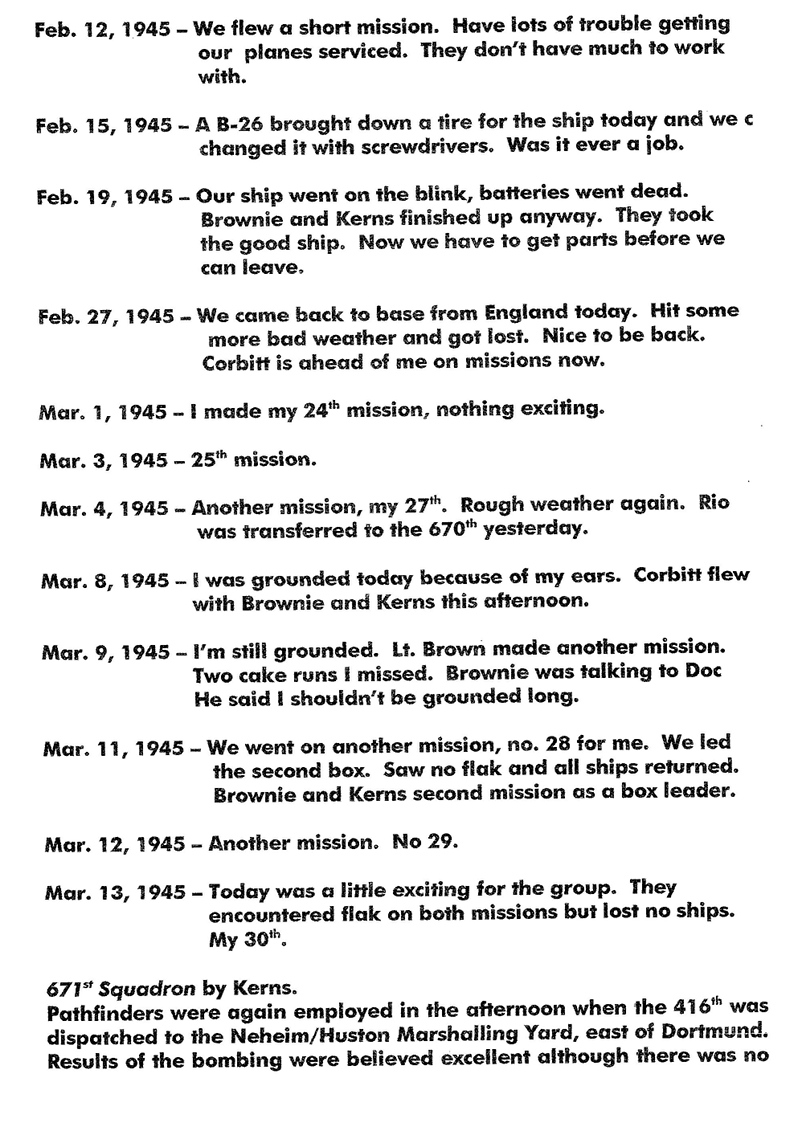 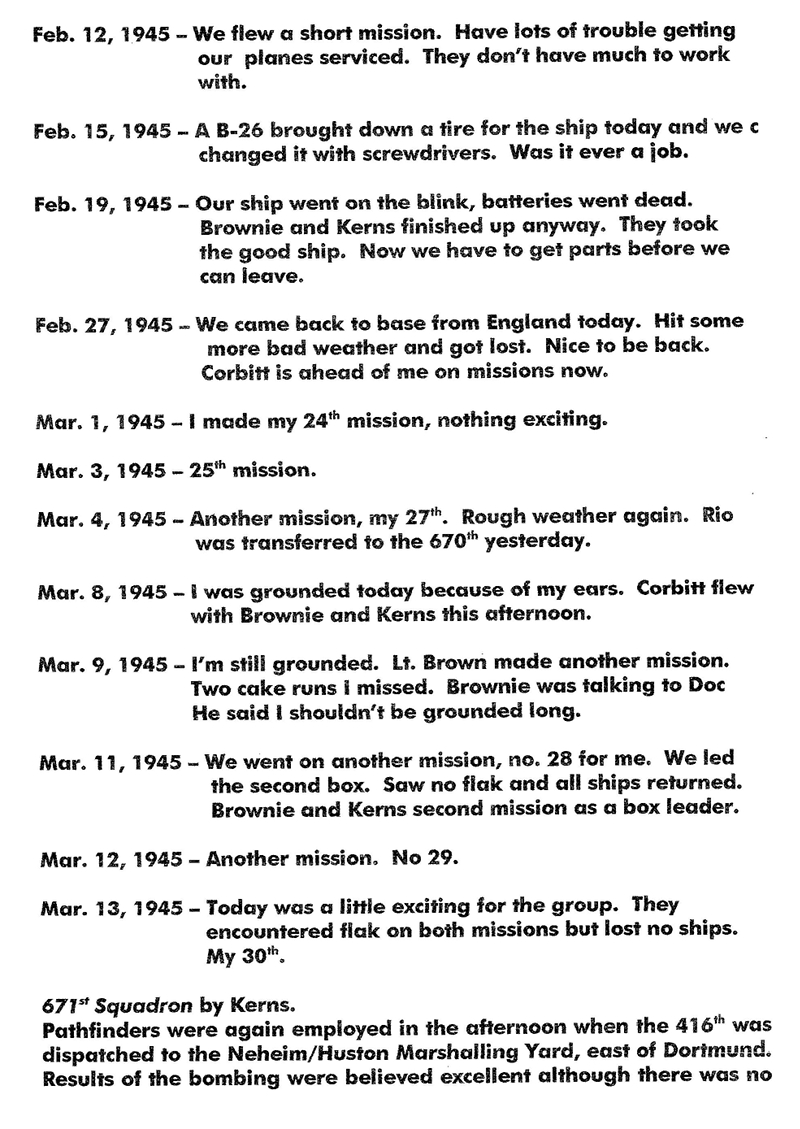 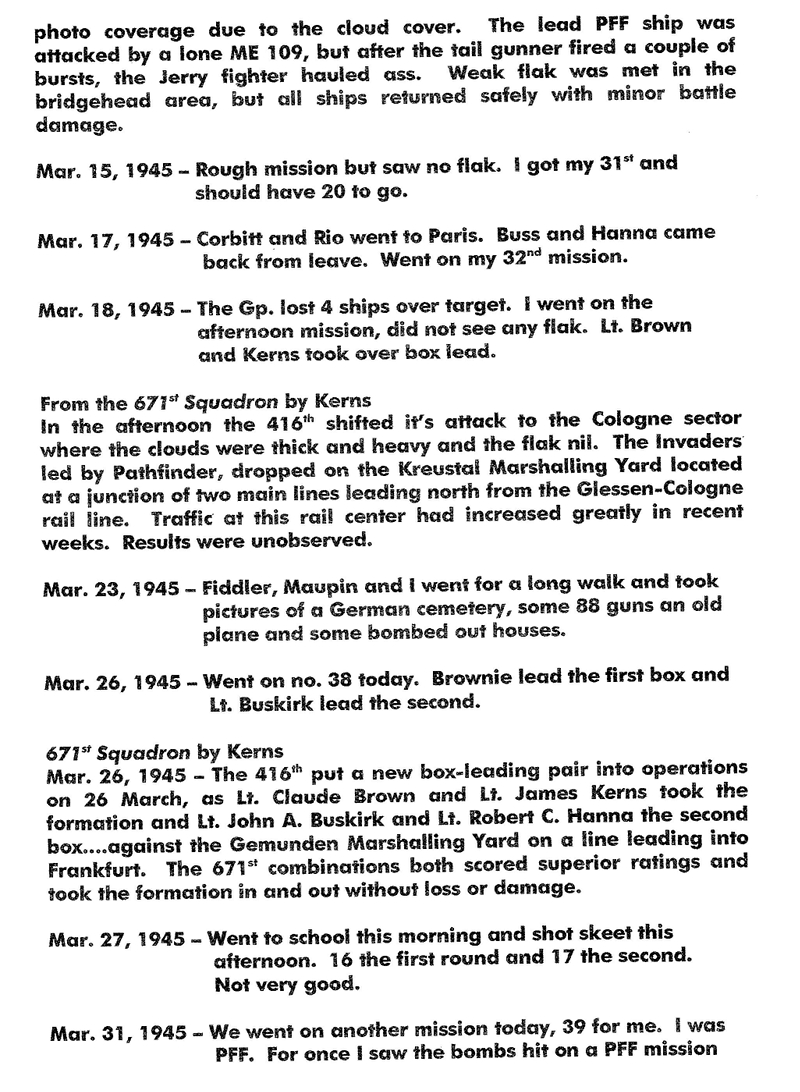 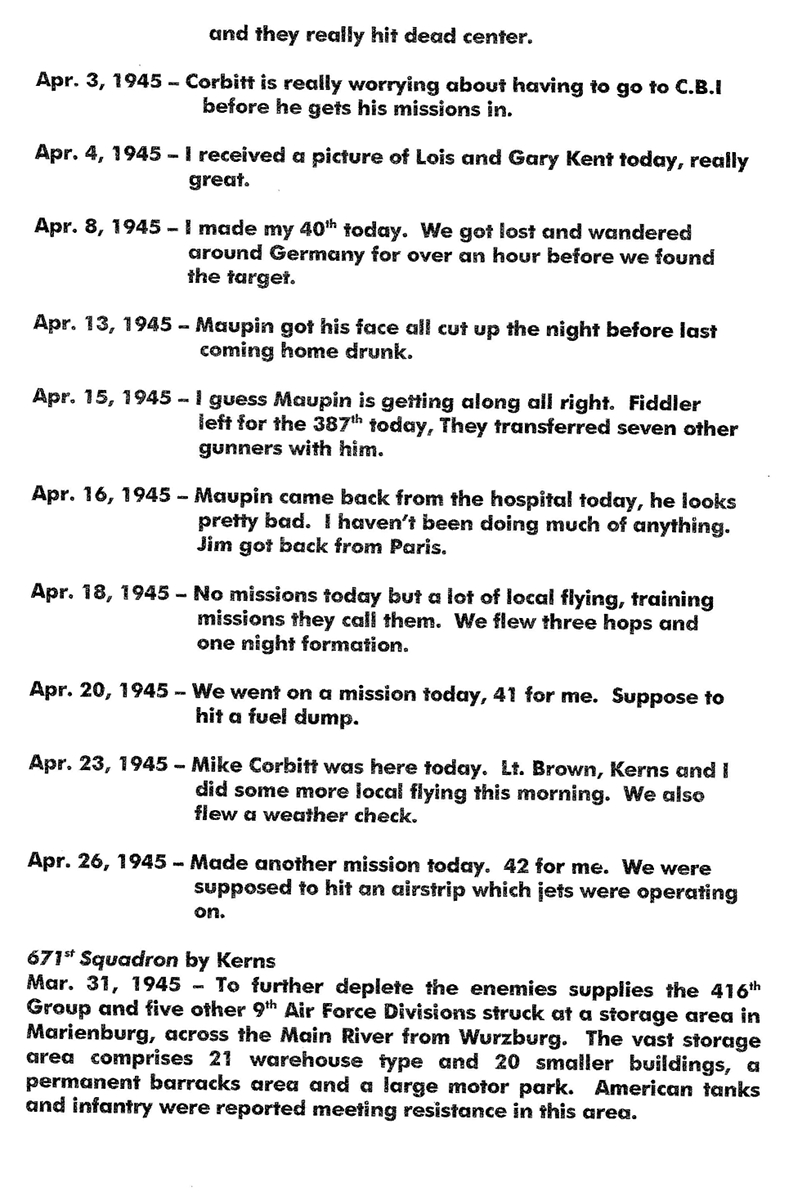 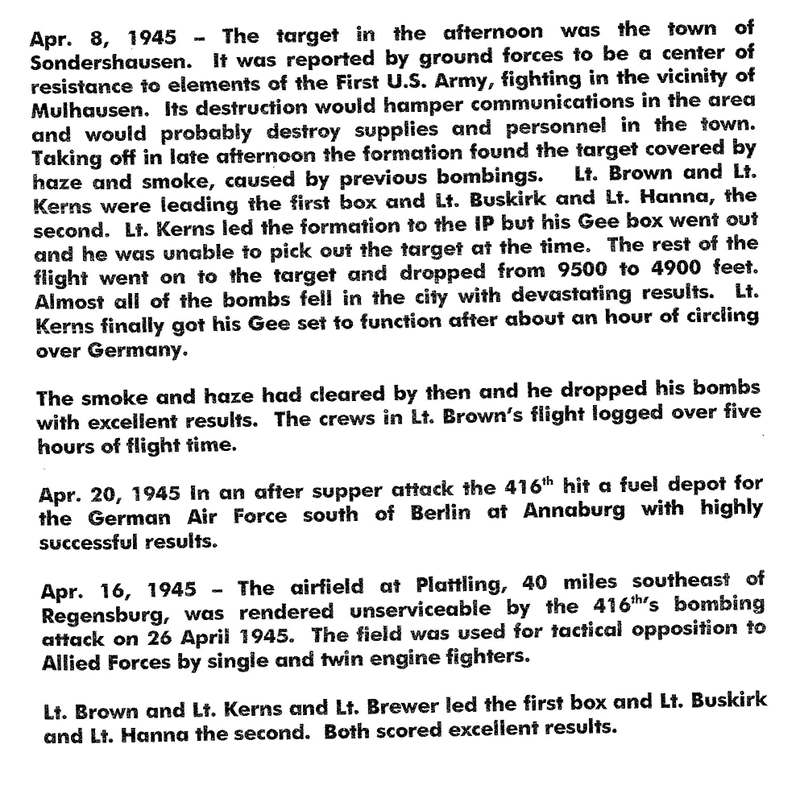 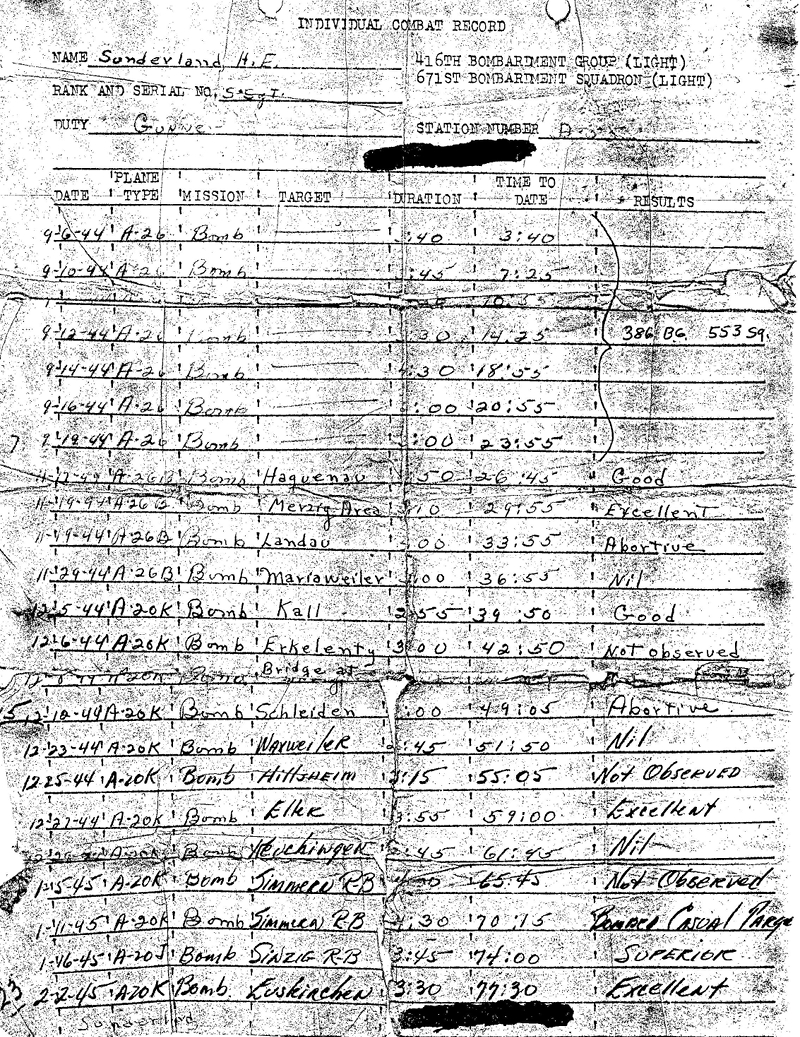